Kolga is a stage interpretation of a poem by Tommi Parkko. The performance combines theatre and circus skills together with music, to create a meaningful and atmospheric production with striking imagery and memorable sound and lighting design.

Kolga premiered in Helsinki in October 2016. The renewed version Kolga 2.0 visited Feile na Bealtanaine festival in Ireland in April 28-29, 2017 in An Lab Theatre. After that Kolga was seen in the Teresa Pomodoro Prize event, on May 3 and 4 at Spazio Teatro No’Hma, Milan.

‘The poem by Tommi Parkko is like a recipe, from which Myllyteatteri concocted an extraordinary piece for the stage. Henna Kaikula surpasses herself with an astonishing performance. She extended the concept of humanity in Kolga, bending reality itself with the many amazing characters she created and presented.’ – Aleksis Salusjarvi, YLE (Finnish Broadcasting Company) 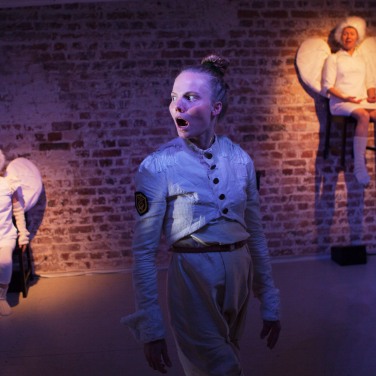